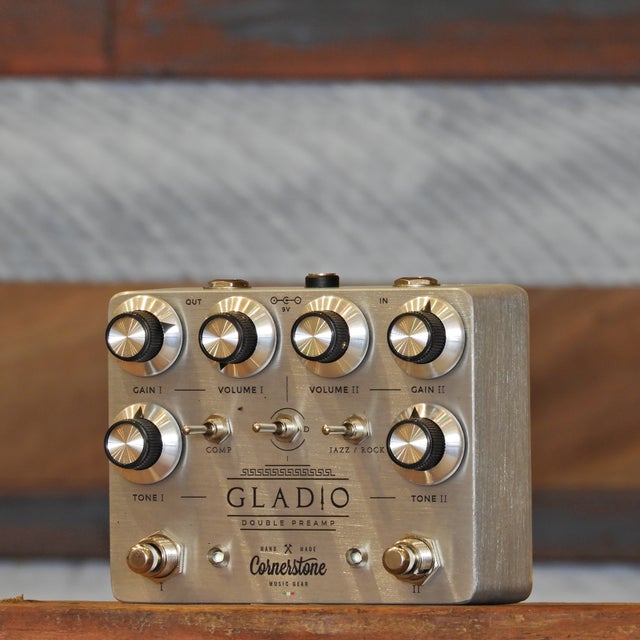 We’ve always been fascinated by the sound of great artists like Robben Ford or Eric Johnson (to name a few) and it’s always been our dream to recreate those sounds in a pedal. To do that, we soon realized that the key was to be able to offer something close to the amps they were using.

The design goal had a name: Dumble.

This is the reason why GLADIO is not just an overdrive; it’s a realistic tube-compression preamp able to take the sound into saturation still always retaining a rich touch-sensitive response and realistic compression.

WHY A DOUBLE PREAMP?

It’s all about versatility. GLADIO has two independent channels with totally different voices, which combined together offer an even wider range of sounds.

The 1st channel is able to deliver a smooth and creamy sounds (inspired by songs like Robben Ford’s Cannonball Shuffle). It’s really transparent and with a round touch-sensitive response that helps enhancing the playing. Controls (Gain, Tone and Volume) are self-explaining and there’s a toggle switch called COMP to choose between two different compression levels.

The 2nd channel is designed to offer a special hard clipping sound pretty much inspired by Sonny Landreth’s tone. Controls are all self-explaining and there’s a toggle switch called JAZZ/ROCK, which should not need presentations.

The Gladio is equipped with a special toggle switch to choose between two different switching modes.

In Single mode you can use only one channel at a time, which means that pressing the footswitch of one of the two channels makes the other turn off (avoiding tip tap dancing).

In Double mode you can stack the two channels to reach a huge fat Dumbl-esque sound.