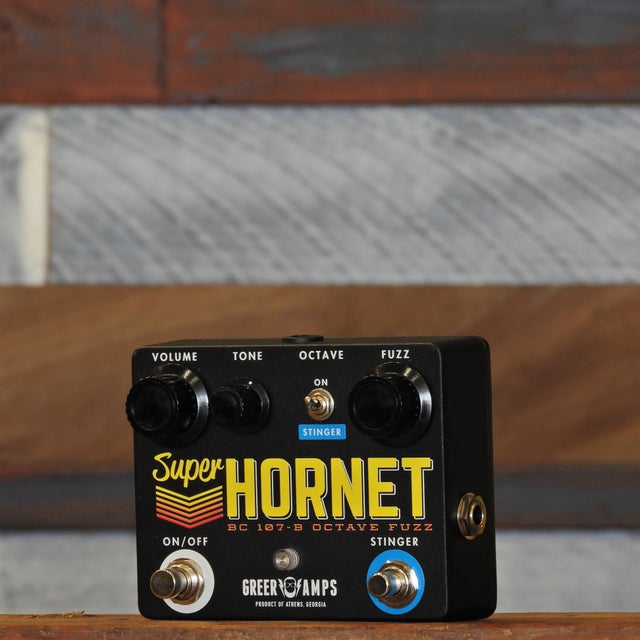 The Super Hornet has been a long time in the making…at least in Nick’s mind. Based on one very special FOXX Tone Machine in Nick’s collection, this pedal is a shop favorite when it comes to fuzz and anything octave. We took the basic building blocks of the vintage circuit, tweaked it, put a little bit of special sauce in the design by using NOS BC-107B transistors, and threw an added feature in the mix. You’ll notice that there is an octave toggle, like on the vintage units that these pedals are styled after…but, that’s not just a straight-forward on/off toggle. When the toggle is in STINGER mode, the momentary STINGER switch becomes active. You can simply stand on the momentary switch, to engage the OCTAVE for a lead run, then come off of the STINGER switch to return to normal fuzz, or even tap the switch, to flutter the octave on and off. This feature is absolutely awesome. When the toggle is in OCTAVE mode, the fuzz is permanently an OCTAVE fuzz, and the STINGER switch is NOT ACTIVE. The fuzz control goes from light fuzz with some clean, to raging wall of fuzz tones. The tone control is a wide sweep tone control. All in all, this pedal is a perfect addition to any guitar or BASS player’s tone arsenal. The OCTAVE even works in low fuzz settings!